Lake Oconee is fortunate to boast 8 (soon to be 9) of the finest golf courses anywhere in the country.  Each has its own distinct style and offers challenge to the serious golfer, as well as enjoyment for the occasional one. 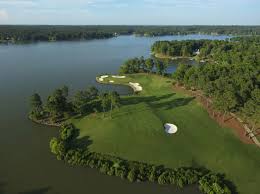 Reynolds Plantation offers 6 courses with 117 holes for play.  The Plantation course was designed by Bob Cupp, in conjunction with golf professionals Fuzzy Zoeller and Huber Green.  It opened in 1988 and was immediately recognized as one of the top 10 new resort courses in the world.  The Bob Cupp course is characterized by a natural, rolling layout that possesses many subtleties.  The Great Waters course offers players some of the most dramatic golf scenery in the southeast.  This course was designed by Jack Nicklaus and opened in the fall of 1992. The course is ranked among the Nation’s finest.  9 of the 18 holes play along the shores of Lake Oconee.  Tom Fazio’s National course, boasting 27 holes, features impressive elevations, wonderful views and several holes were added in 2000.  Reynolds Landing, formerly Port Armor, opened its course for play in 1986.  Designed by Bob Cupp, it has continually ranked in the top 10 courses in Georgia.  The course demands respect from its players and offers some breathtaking views.  In summer 2005, Reynolds Plantation purchased Port Armor and renamed it Reynolds Landing.  The Oconee course uses the combination of stunning terrain and an excellent routing plan to create an abundance of exciting golf.  Rees Jones has created a classical masterpiece that resort guests will truly enjoy and return to play again and again.  Paired with the Ritz Carlton Lodge and the new Dave Pelz Scoring Game School, both are adjacent to the Oconee course and offer an unbeatable package for golf enthusiasts.  The Creek Club is the newest course at Reynolds Plantation and it is the first private “Members Only” golf course.  The course opened in June of 2007 and was designed with rolling bunkers, zoysia grass fairways and striking water features. Designer Jim Engh, also referred to as the game’s “Hottest Designer” by Golf Digest, was honored as the magazine’s first ever “Architect of the Year” in 2003.  The Creek Club is a contemporary, thrilling golf masterpiece. 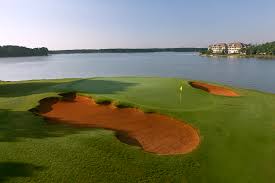 Cuscowilla is home to the highly acclaimed Golf Club at Cuscowilla designed by 2-time Masters Champion Ben Crenshaw and architect Bill Coore.  Since opening in 1997, the course has caught favorable attention of many prominent national golf magazines.  In March 2007, Golf Week rated Cuscowilla as having the #1 “Best Residential Course in America.”  The February 2002 issue of Golf magazine ranked the course as #22 on the list of “Top 100 Courses in America You Can Play.”  Golf Digest’s 2005 list of “America’s 100 Greatest Public Courses” slotted Cuscowilla at #61.  The design emulates the land and rambles naturally over a former hybrid pine nursery bordered by 6.5 miles of shoreline. A view of Lake Oconee can be seen from 10 holes.

Harbor Club sought the expertise of Tom Weiskopf and Jay Morrish when designing their course.  The Harbor Club course opened in April 1991 and has consistently received national recognition, including, “America’s Great Golf Course Communities” by Golf Week, 2002-2005. The course was selected as one of the “Top Golf Course Communities Around the World” by Links Magazine, 2002-2004, as was host of the PGA Tour Qualifying School and the GA State Open in 1996.  Water hazards are plentiful with Lake Oconee coming into play 6 times, plus 4 creeks and several interior lakes, and the 18th hole offers players a choice of 2 fairways and 2 greens.

The Landing Lakefront Homes For Sale

The Landing Lakefront Lots For Sale

The Landing Homes For Sale $400k and Under